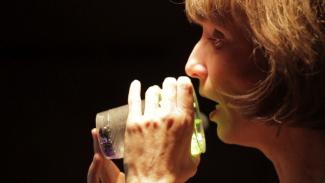 In this programme, experimental vocalist Ute Wassermann, known for her personal many-sided nonverbal sound language, presents mostly pieces specially composed for her, in which her voice is taken outside itself, is multiplied or masked, brings resonance-objects into vibration or is gradually submerged in a musical instrument. The compositions are expanded by means of a light-installation by Michael Vorfeld into a light- and voice-performance. Working with the ephemeral and immaterial character of light and sound, while also using the ability of both light and sound to capture a sense of space and to create a strong atmospheric effect, are essential elements of this project.

The compositions of diverse durations range from fully-notated scores to open-form compositions. Each composition redefines in a different way the threshold at which the voice makes contact with the outside world. The boundary between self and environment is differently redrawn each time, so that this boundary itself becomes an illusion, behind which an audibly more complex and indefinable reality lies concealed. Ute Wassermann (wearing as projection- and reflection-surface a light-coloured dress) and Michael Vorfeld embody each work as a distinctive voice-light-persona.

In each individual composition the performer and the space are illuminated by Michael Vorfeld in real time so that their appearance is constantly changing.

Using the most varied light-bulbs, slide-projections, fluorescent lights and a light box, various qualities of light are created, which decisively influence the visual image and perception of each composition.

voiceXtensions begins with two compositions which integrate loudspeakers: Song no.3 (Cathy van Eck) in which a loudspeaker–object substitutes for the vocal organ, followed by Silence is my voice (Matthias Kaul) in which the vocalist performs a duo with a speaker in her mouth distributing recordings of her own voice and other sounds. Lied E from the song cycle Daily Songs 5 for voice, modulator, resonator and prerecorded sounds by Michael Maierhof features the “prepared voice”. The vocalist sings with a modulator through a plastic resonator and distorts and extends the pure sound of the voice into different multiphonics. In Strange Song 3 Ute masks her voice with a variety of birdcall whistles to create a hybrid voice-instrument. In his composition Study for string instruments #2 version for voice Simon Steen–Andersen uses the "whammy pedal" as a musical instrument, placed on a stand and played with the hands by the performer. It transposes, counteracts or neutralises the glissandi sung by the vocalist – and invents a melody. Another Light Bulb Song by Vorfeld/Wassermann features a variety of flickering, amplified lightbulbs shaping a sound instrument and performing an electric- rhythmic duo with the vocalist.